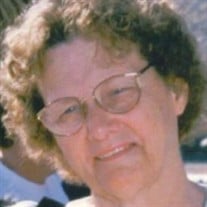 Jeanne Mildred (Collings) Rhome was born December 21, 1935 in Springfield, Massachusetts, the daughter of Hudson & Frances Collings and Louis “Chick” & Mildred Souvigney. With family by her bedside, she peacefully passed away at home in Draper, Utah on October 7, 2021 at 85 years of age. Jeanne grew up as a child in the Springfield, Massachusetts area (including the communities of Springfield, East Long Meadow and Forest Park), and attended Technical High School in Springfield, MA. Soon after her marriage to Robert Lee Rhome (who was then serving in the United States Air Force) they moved into a small apartment in Washington D.C., with scenic views of the National Mall area and surrounding blossoming cherry trees. The Rhomes began their young family there with the birth of their first child, Robert, Jr.. Jeanne later lived in several communities in the states of Delaware, Arizona and California. While living in California, Jeanne raised her big family of six children primarily in the San Gabriel and West Covina areas. After raising her family and retiring from her full-time employment, she resided in the cities of La Puente, CA, Fontana, CA and lastly Draper, UT. Although she moved to Draper, UT to be with her youngest son, she still considered California (a place where she lived for over 60 years of her life) to be her “true home” while living among her many beloved family members and friends there. Jeanne had long careers with both Ball-Foster Glass Container Company and Mattel Toy Company. Upon her retirement, she thoroughly enjoyed learning and using the personal computer, the Internet, cell phone, personal tablet and other modern technologies. She also enjoyed and treasured the numerous rewarding experiences and fond memories of spending time with her family members and close friends, including traveling with them on several vacation cruises and Hawaiian trips, frequent camping trips and visits to the beaches in Southern California. Jeanne demonstrated a strong work ethic and firm commitment all her life to provide for her family, and willingly and often helped many of those in need. She was a great example to all of her selfless love and concern for others. Jeanne was also a truly a kind-hearted, sharing and forgiving person to all, and was highly-admired by all who were fortunate to know her and have her as an important and active part of their lives. She is survived by her living children, Robert (Dorothy) Rhome, Jr., Randy (Kim) Rhome, Russell Rhome, and her living grandchildren Debra (Jesse) Wright, Nicole Wotherspoon, Heather (Ken) Gilham, Dean (Rachel) Ward, Richard Rhome II, Tammy (Carlos) Rhome-Zalduondo, Michael Nix, Kristie (David) Baker, Summer Mattes, Rhiannon (Matt) Griffin, Opalgene (Mitch) Beck, Dayna Rhome, Kirsten Rhome, Russell Rhome, Jr., and her many great grandchildren and great-great grandchildren, Jeanne was preceded in death by her father (Hudson), mother (Mildred), stepfather (Louis “Chick”), stepmother (Frances), twin sister (Jeanette), sister (Suzanne), brother (Hudson, Jr.), husband (Robert), daughter (Donna), daughter (Jeanne “Suzie”), son (Richard) and grandson (Sean). Future plans for the family to gather together in Jeanne’s “true home” of Southern California for a “Celebration of Life” to honor her life and legacy are still pending. Needless to say, Jeanne was a genuinely loving daughter, sister, wife, mother, grandmother and true friend to many, and is already greatly missed so much by all of us. Please share your personal memories or positive thoughts about Jeanne (and how she touched your life).

Jeanne Mildred (Collings) Rhome was born December 21, 1935 in Springfield, Massachusetts, the daughter of Hudson & Frances Collings and Louis &#8220;Chick&#8221; & Mildred Souvigney. With family by her bedside, she peacefully passed away at... View Obituary & Service Information

The family of Jeanne Mildred Rhome created this Life Tributes page to make it easy to share your memories.

A comforting word from you means a lot.

Send flowers to the Rhome family.